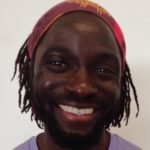 I was born in Guinea-Bissau, West Africa, grew up in Portugal and moved to the UK, in 2008. My dad had immigrated to the UK (from Portugal) and all of places, he ended up in Great Yarmouth. I joined him a few years later. The town could have been a simple starting point, as in, I could have stayed there for the first couple of years and then moved on to other places. Yet, after ten years, I still consider Great Yarmouth “home”.

What makes me feel that way? What has kept me in the town for all these years, despite all the chances I had to move on? The answer is simply, God.

Prior to my arrival to Great Yarmouth, I accepted the challenge to share the gospel with those who have never heard it before.

When I arrived, I was surprised by what I encountered in those fellowships I visited. The numbers of church attendees were not encouraging and yet, the most challenging thing I encountered was the absence of young people in the churches I visited. I wondered where they all were.

I ended up settling in a fellowship where I felt challenged to “stay until the chairs were filled” for when I arrived for the first time, the church had only 6-8 people. Immediately, I felt burdened to stay there until the chairs were filled. By the time I left to go Bible School at the beginning of 2013, the Lord had begun a wonderful work in the church. He brought in people with a variety of gifts through whom He filled the chairs.

I left Great Yarmouth to attend Bible School with the intention of returning to the town to serve. Even though there were tempting proposals to serve in other places, I chose to stick to what I had determined when I left the town.

Even though Great Yarmouth in general, needs the Gospel, I believe our youth need to be reached too. I remember going to an East Norfolk Youth For Christ presentation, about 8-9 years ago and getting really excited that there were people in the town doing what I was thinking of doing – a co-ordinated youth outreach.

I decided to support East Norfolk Youth for Christ from the time I learnt about what they were doing, because I believe it is part of the commandment given by our Lord Jesus and also for the future of the Church. In the gospel of Matthew 28:18-20 we are given the command to go and make disciples of all nations. The context of this portion of scripture sheds light into the heart of the Lord.

A president/prime ministers/governor/ruler etc is known by what they do after being given the authority of their office. Prior to being given that authority they observe the surroundings and discern what is needed, the changes and decrees that are necessary to bring about the desired changes. The moment authority is given, the decree that is issued immediately by the ruler speaks of what they consider to be the top priority. Matthew describes the Great Commission as being our Lord’s top priority. After His resurrection, He was given all authority in heaven and on earth. Almost immediately after receiving all authority in heaven and on earth, He issues his first decree or command. This was what He longed for, this is the priority of his heart: “….go and make disciples of all nations, baptising them in the name of the Father and of the Son and of the Holy Spirit, and teaching them to obey everything I have commanded you.” promising to be with His followers always – to the very end of the age. The Great Commission is Lord Jesus’ top priority, if not His only priority.

I have been called to carry out this command; the challenge of taking the Gospel to those who have not yet heard it.  This has led me to serving twice in East Asia. After my second spell in East Asia I was brought back to Great Yarmouth. Although a decade has passed since I arrived in Great Yarmouth, one thing has always remained as strong as ever; that it needs the Gospel and our town’s young people need and deserve to be given a chance to respond to the gospel of our Lord Jesus Christ.

Having known the work of East Norfolk Youth for Christ for over 7 years I am confident that my skills and gifts will help further the vision of giving every young person the opportunity to respond to the Gospel.

I know the Lord will move across the town drawing young people to Himself and transforming their lives as He discloses Himself to them and they respond to His glorious Good News.