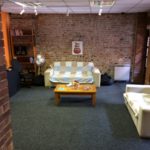 Highly unimaginative name, yes but says what it is; a follow-on from the WEC summer camp. We meet at the office every other Sunday to answer the questions these young people have since their experiences at the camp. We see four regularly and pray that the others will come along; one isn’t allowed to come as she has to cook a meal for the family at that time on a Sunday. The other lad Jamie* who we’ve known for five years (one of the originals at the Café!) doesn’t come to anything anymore as he is at college but thank God for the relationship Ali has been able to forge with the family over the years, enabling her to still have contact with Jamie*. Pray that the healing he experienced over the WEC week will continue and he will start asking questions. For the four who come regularly it is a place where they have a voice and they are listened to. One of the Year 12s (now at college) said “This is the place I can come to and sing!”  They each choose one of the worship songs they remember from camp and we wroship together, then we read a passage in the Bible and discuss it. Sounds simple and straight forward doesn’t it? However, it is pretty chaotic most weeks in that they are all needing attention and affirmation/value and are not used to being in a two-way conversation where they actually listen to each other, so consequently they talk over each other with random statements not connected with what we’re discussing. They will then get the giggles over an “in-joke” and not engage with the passage either. The Year 12 girl says “It’s really difficult to believe because I haven’t grown up with it”  Please pray for her to overcome her reticence and to have a relationship with Him who has been there through all her growing up. The Year 11 lad who comes doesn’t understand at the moment that it is a life changing relationship – he thinks that he has become a Christian through his experiences and prayers at camp and that’s all there is to it.

We have learned to trust God that something of what we’re doing is taking root and will be watered and nourished by Holy Spirit as we “press on” to the goal of seeing them in the Kingdom. Last week, Ali arrived at 4pm to prepare and get the technical side of things sorted, expecting them to arrive around 6pm. However, at 4.20 two of them arrived soaking wet as they’d got caught in the heavy rain shower. Ali was totally caught by surprise and her intial response was, “I’m not ready, you can’t come now” but thankfully Holy Spirit held her tongue long enough for her to remember that we always wanted an office where the kids could come if they needed anything, and that the whole point of this new office is that we are interruptible! So praise God that she had come in early and these two had somewhere warm to dry out. However, out of three and a half hours together we only managed twenty minutes of chat about Christianity. Praise God that as we looked at the healing of the man let down through the roof in Mark chapter 2 Ali was able to share the experiences of healings she has had with Holy Spirit and how God actually DOES heal today because of His great love for us. During that time, they young people were actually silent as they listened! We are learning to be thankful for these snippets of conversation about our Father and trust that Holy Spirit will grow and nurture these seeds “So they will be called the trees of righteousness (strong and magnificent, distinguished for integrity, justice and right standing with God)” (Isaiah 61 AMP version)